First  Prev 3 4 5
So Hammer should refuse to help, gain two of your dice, and try CON himself, yeah?
Yes, and yes, but I think you should go with what you know best re: skill choices. 2 bonus dice would only turn your CON from 1 to 3 dice, but you'd be rocking TERROR at 7, or even KILL at 5 dice. With traits, you could maybe make a good showing with COOL (or even CON, but it doesn't seem like it'd be an efficient use of resources).

2x4
Man, I could not have hoped for better rolls. Whew.

Old Man Takematsu is SUCKERED and out of the conflict, while Reiko and Oddjob are SHOT by Hammer (but aren't Bleeding Out yet).
I'm in the process of doing the narrative. Hopefully it will take less than a fortnight to complete.
It took you exactly a fortnight! 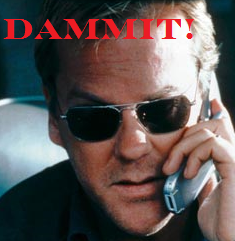 For the next round, I'm gonna go with my KILL 4d.
If shit's hit the fan, its Terror to blow the whole thing up for Hammer.
Things have pretty much gone tits-up.

Reiko is definitely going to try and KILL Trojan for 6d.

Badguys try to KILL everyone with 6d

Trojan also tries to KILL everyone back for 4d

Hammer puts the T in TERROR for 5d

2x4
That's a wash! I'm out of Traits, and we didn't set up helping dice, so unless Hammer breaks out his baseball bat trait and scores another match, we'll all take an effect from the skills we chose. Hammer will be Hesitant, I'll be Shot, and the opposition will upgrade from Shot to Bleeding Out.
HAMMERTIME with his bat!

DOH! No sets!
And that's the game, folks. I hope everyone had a good time. For next game, I was considering a 1930's pulp game.
Bug testing pagination and recent posts..
First  Prev 3 4 5